A bit of Chapter 1

–          I don’t know what the goat, Lady symbolizes. It must symbolize something; if not Suzanne Collins would not spend a few pages of a story of Katniss telling Peeta about how she got it for Prim. The same story repeated during the anti-hijacking session with very little success on Peeta’s behalf and the goat probably died in the end. I just don’t get it. Why? Does it represent Prim? Was it a take on sacrifice? Was it just demonstrating how Katniss try to justify her action without success?

I hope someone would be able to help me to understand the goat.

–          The first unity declaration by District 12 done was on the day of the reaping when Katniss volunteered. It was the first step to defy the Capitol on national television: silence, not clapping and the silent admiration salute. All of it changed in Catching Fire when the majority barely supported Katniss at the square when Gale was whipped. It was all downhill after that. It’s as if they blamed her (and Peeta) for all the bad things that happened in District 12. This was a complete reversal of attitude from the first book. It doesn’t change much in Mockingjay when they are all in District 13. District 12 was not very keen on violence though the face of rebellion originated from their own Seam.

–          Peeta haven’t spoken to Katniss until they were on the train. 11 years passed since he noticed her and he didn’t even say a word, not even after he gave her that bread 5 years ago. She noticed him glancing her way at school several times but both have this unspoken rule about not approaching each other. Why? It could have been a very easy/nice way to start a conversation. All of a sudden, ‘How was that bread?’, ‘are you okay?’, ’how’s everything with your family?’

O.K. That was awkward. A bread and now we’re like, friends?

The obvious issue was class separation between the Seam and merchant kids. The tesserae severed the little trust that they have for each other besides living in separate part of District 12. Katniss does not belong in Peeta’s circle and vice versa so they let it be that way.

I also think that Peeta is a kind boy and he helped her without expecting anything in return, maybe because he loves her, maybe because he’s just being kind. Maybe the combination of both. He doesn’t seem the kind of person that will let injustice prevails or ignore people suffering. He was disgusted at Capitol’s party in Catching Fire and had the idea to fan the fire of the rebellion. He is genuinely a good person with a big heart.

Unfortunately that fated day, Katniss saw him got beaten by his own mother. She called him a ‘stupid creature’, for God’s sake! Not a boy, but something less than that. Almost like an animal. He already liked her since forever and finding his own mother calling him such a thing in front of her did not help with his confidence. I highly doubt it if he ever thought to confess his love (or even get the girl.) He did it because he was convinced that his death would benefit Katniss somehow, in the term of sponsors. His sole life purpose was to die in order to keep Katniss alive.

If we look on the other side, we know that Katniss was never good with words and seeing Peeta being with other merchant friends would make her nervous since she doesn’t really socialize well. She doesn’t even consider Madge her friend although she was the one Katniss end up with every time. So we could assume that it would be out of character if she suddenly approach Peeta to say thank you and left.

Taking note of what Peeta said in the cave about the bakery making apple and goat cheese tarts but they only eat stale ones, Katniss realized that she was wrong about the baker family. She thought they had a ‘soft’ life. Also, this means that the bread Peeta gave her was expensive, even the family cannot afford to eat it, let alone waste it. That was why he was punished dearly for being so careless.

This act of kindness saved his life. She was touched by it and I considered it the most crucial and important moment of the book.

If he didn’t throw her that bread (he could have ignored her since he knew what’s coming), she would have not owed him nor paid attention to him although he had a serious crush on her. She would never realize that fact ever. Furthermore, she would not feel as guilty and might take him out easily but the whole thing with the bread make her think and feel. It’s against her instinct for survival, against her stoic expression and many attempts to feign indifference towards her competitors.

Her alliance with Rue made her feel more. She was almost like her sister, Prim and her death was one of the most ‘despicable’ as said by Peeta. After that, Katniss realized what Peeta said on the roof was true. They are not pieces of the Capitol’s game. This journey from being a person who refused feelings and thought that being expressionless will gain her more sponsors changed to another person capable of mourning and crying. The interesting part was that when she started to embrace her feelings (singing for Rue’s death, caring for Peeta), and that is when the people of Panem responded better. These feelings kindled her fire.

Still, she has no idea the effect that she can have. 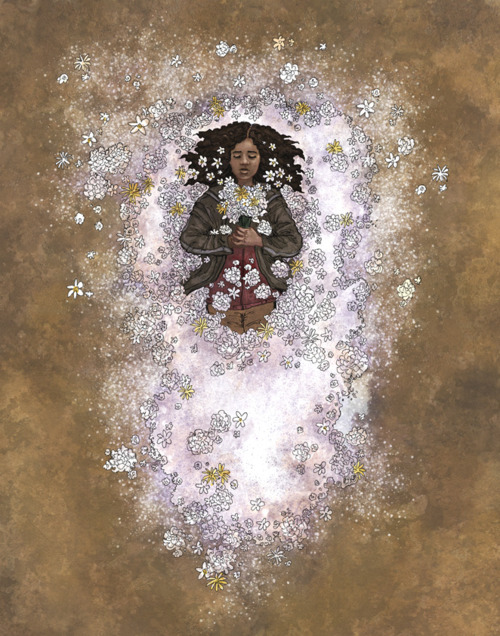 The feelings grew when she met Peeta and it has been growing ever since.