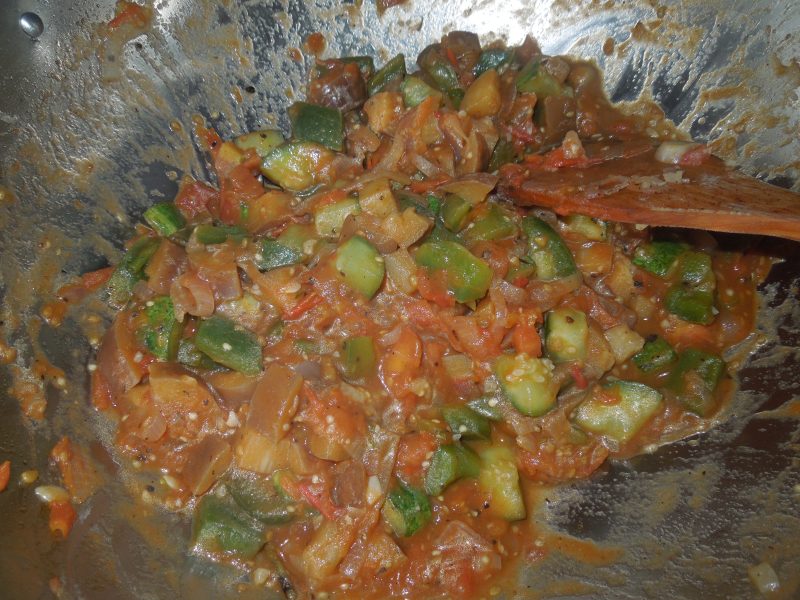 I saw several ingredients in the fridge and thought to myself that I should do this for once and for all. My brothers can eat something else (they are not a fan of any kind of vegetable) so this morning I chop, chop and chop like I like chopping.

I read somewhere of the origin. It was the farmers in the region of La Mancha that stewed the crops that’s available for their staple meal. And so ‘pisto manchego‘ got its name.

The recipe was told by a fellow local passenger in a bus. We sat together from Irún to Santander. He didn’t say a word until I started the conversation when he refused to stop. I gave him a Malaysian note and he insisted paying on my lunch.

“This is my favourite! How do you make it?”

I was presented to this stew when I was in Madrid. There was an exquisite canned version that made me swoon. The sort of addiction that needs to be attended to, be it a simple spoon. So I kind of consume it religiously, everyday with everything – bread, omelets, rice, pasta or just straight from the can.

So this morning, all I needed was a good pan.

Everything was diced, except garlic which I minced. I was told everything is better if you grill it.

This is good for 4-6 people in one go. It gets better the next day and the next, if you have more.

3) One medium capsicum of your favourite colour. Blue isn’t natural.

5) 1 kilo worth of fresh, ripe, tomatoes or one canned tomatoes with juice

1) Heat your oil. I used olive oil but I’ve tried other vegetable oils with about the same result. Throw your garlic and onions. Let them wilt for a while.

2) Add capsicum. After about 3 minutes, add your eggplant and cucumber. Wait 3 minutes.

3) Lastly add tomatoes and stir frequently. Let all the tomatoes melt and you can see it slowly becoming the gravy. This should take from 5-10 minutes, depending on how ripe your tomatoes are. Let it simmer.

4) Add salt and pepper to taste. Cumin is optional.

My first brunch was served at the university cafeteria with a half of French bread and topped with poached egg. Divine.

I prepared cakes, pudding, muffin and brownies (for my own curiosity’s sake) but never tried any type of bread. First, because my Father prefers to buy it and secondly no one in six generations ever tried kneading a dough for meal purpose.

As Malays from Malaysia, we eat rice at least 3 times daily. Bread is something you stuff to fill you up at tea or late night supper when Mother kept all the things you can eat in the fridge and you don’t feel right ruining her recently wiped kitchen area.

So my first try was not awesome.

This was the first time I used a roll. I was panicking all the time! My Mother cannot believe how terrified I was to try this out.

You can have a look at the original site. It’s actually a very neat Indian flatbread recipe which is why I was tempted to try.

Though the actual recipe would give about 15 fluffy breads, I reduced it to half and used one type of flour. Mother threw away our last source of rolled oats so my morning mission of making my first multigrain flatbread was not fulfilled.

The review was nice. 4 people would definitely eat it again but warned to make an appropriate curry to company the light course. It looked like ‘naan’ bread but tasted like ‘chappati’.

INGREDIENTS (double it if you want)

1) A cup of shredded vegetables. I used carrots (You can see the reddish tint) You can use potatoes, spinach, onions, to name a few.

2) Half a cup of plain yogurt.

1) You can puree the vegetables and yogurt in blender and later mix with the flour, adding little water until you get a dough with a sticky and smooth appearance.

2) Cover with kitchen towel and leave it to rest for at least an hour at a warm and dry place. It will not rise as much.

3) Keep in your fridge for several hours up to overnight before using.

5) Divide the dough into small balls. Mine was about 6 small 3 inch balls. Dust a flat surface with flour and roll away. I don’t know how to make a perfect circle, noted from the picture so I guess any shape will do. It should be thin, about 1/4 inch.

6) Slide your rolled dough into a greased baking sheet. Wait for about 2 minutes or until you can see brown dots on the surface and flip to the other side.

7) Repeat with other balls.

The recipe was obtained from a coincidence. The picture looked very nice.
I prepared the potatoes just before dinner, some sort of like appetizer. It was not as crusty because I used canola oil (Mum said she finished the last drop of olive oil last week) It’s tasty, easy to make and quite fast to prepare. I had to make 2 batches in one hour.You should have the essentials. This served 3 hungry potato madmen at my house, twice.

1) Preheat oven to 220 C.
2) Cut each potato in half lengthwise. Cut each half, lengthwise, into 4 equally sized wedges. Add the potato wedges to a large mixing bowl with the rest of the ingredients. Toss to coat the potatoes evenly.
3) You can line a sheet pan with foil but I just put it in a metal tray without having any sticking problem later. Place the potato wedges. Bake for 35-40 minutes, or until well browned, crusty edged and tender (you can test with fork) Serve immediately, sprinkled with more salt if desired.

My sister bought some 120 g of ground almond because she thought that she would use it to bake almond cookies.

She didn’t. She baked other cookies but almond ones.

Since I would hate it to go to waste, I did some research and found out that some cake recipes just substitute ground almond for flour.

So I thought I should give it a try.

This is the celebrated short life of the Flour-less Chocolate-Almond Cake.

I didn’t follow the recipe religiously. It served as a guideline.

I had to thaw the butter because I put it in the freezer all night 🙂 I needed only half of the bar.

As you can see, there weren’t many ingredients.

I am not an Egg Separator Professional. I broke the egg, place it on the palm of my hands and let the egg yolk wriggles between my fingers. The egg white will slide in between into the clean bowl placed below.

3) I whisked the egg yolks and brown sugar until fluffy and quite pale in colour.

And in another clean bowl, you have the egg whites:

4) Whisk the egg whites until stiff. Use a machine. I spent an hour to get the desired consistency and gained about 100 g of bicep muscles.

5) Later did I melt the dark chocolate with salted butter (in a double boiler) or just place a chocolate filled metal bowl/pot/container on top of a steaming pot with boiling water. Whisk it until it’s all melted and had a liquid smooth consistency. The original recipe asked for the melting process to be done first but I knew the eggs would take some time so I reversed it.

Note: Just make sure the water didn’t touch the bowl or the chocolate will be bitter.

6) The delicate part: Pour the melted chocolate into the bowl with the egg yolks and sugar and combine thoroughly. Mix in the ground almonds (*and ground hazelnut) then immediately fold in the egg whites gently, using a metal spoon.

7) Pour the cake mixture into the tin and bake for 25-30 minutes. Mine was set for 27 minutes. Check with a toothpick or a fork. Prick the center and if it comes out clean it’s ready.

8) Remove the cake from the oven and leave it to rest for 10 minutes before unmoulding.

I did not even consider for a topping because that would proved to be too much. The cake is already rich, crispy in the outside, very nutty, chocolatey and creamier than most moist chocolate cakes.

The chef suggested clotted cream for serving and I looked for a homemade recipe. But calculating the timeline, I decided not to do it (8 hours in the oven? The cake would find it’s way to the sewage lines already) so we resolved to have it with vanilla ice-cream topped with chocolate lava sauce.

The result was paradise swirling inside of your mouth.

I had about 3 slices. The boys had about 6 per person.

At 9 PM (8 hours of cake life), it was all officially gone. This was the breaking record. Of all the chocolate cakes I baked (all with different recipes, ranging from 1.5 kg-2.0 kg) my brothers took about 2-7 days to consume it.

This one is a masterpiece.

This is the main dish on Hari Raya. We usually steam them after a delicate process of wrapping it with a certain kind of leaves. There are 2 kinds of ketupat for Hari Raya but I only know how to make this one.

Normally each house presents a dish for the guests so that they would not go hungry just eating ketupat and cookies. My house offered laksa. 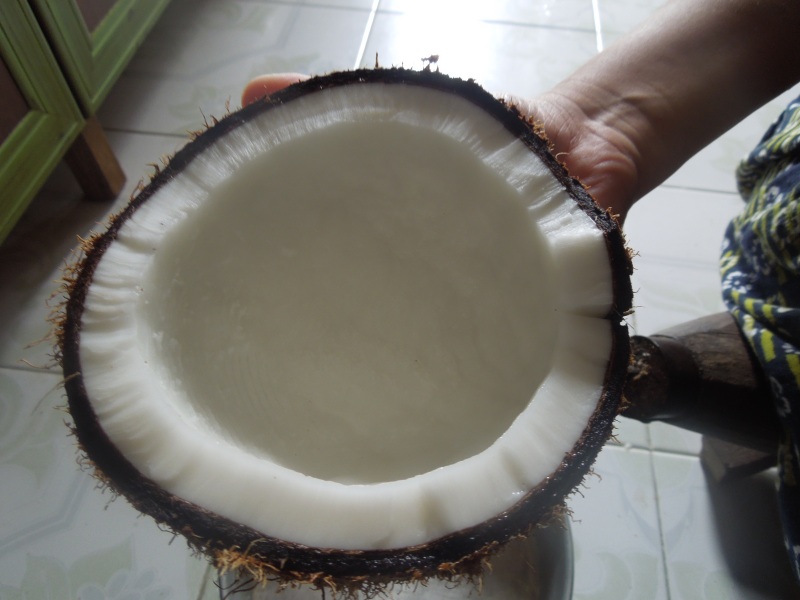