It was the best 8 hours I had this year.

I was really hoping that this trip would be better than the last trip to Kuala Lumpur. My book was launched in March and it did not quite go along the lines. I regretted ever having made that trip, to be honest. It’s the kind of journey that made sick people sicker. But it’s my first ever experience meeting other writers and some artsy people in KL and I guess it’s kinda awesome seeing Asian people pretending to be as hip as they could with their dreads and sarong pants with cotton sling bag stamped with elephant designs. I bet they must feel in the zone.

I cannot say the same for my part.

Well this time I felt better, not really out of space. I saw normal people around me and speaking the same language as I do (My English is not very good, speaking-wise and I have no intention of speaking English with people I knew whose mother tongue is Malay) The first day I was in Kuala Lumpur International Book Fair (KLIBF) was on the 1st of May. I chose the date because I knew for a fact that there would be a lot of people as it was Labour Day but until that day came that I realized it was deemed more that I could ever handle. Statistically, it was about 800,000 people. The enormous hall was cramped and though the air conditioner was in full blast, I was sweating though my blouse. It was hot and sticky affair.

Although there were so many people, I did not expect to have that many fans. My session was from 10 a.m until 12 noon and all I did was smile and signed and took selfies with them. It was indescribable, that feeling. I did not picture that some random strangers would put aside allotted time, some effort and money to reach out to me and honor my writing. It’s the most wonderful feeling.

The next day I have another 2 hours before another writer takes their turn. There were less people but a girl about 15 and her mother came at 10 sharp. They told me they drove 5 hours just to see me but yesterday I went back early (I have a lunch date with an old ex-colleague and her family and for the record I waited 15 minutes for the queue to clear) so they stayed another night in KL to catch me the next day. If I were them, I would have gone back yesterday because I would not have the determination of waiting another 24 hours for someone like me. The girl is a very fortunate child.

I think that gesture made my life, however insignificant I felt before this. Someone values me that much.

The last day I stayed for 4 hours along with other writers (an editor complained that maybe I overstayed my welcome) and did the same thing all over again. I quite enjoyed it though before this I find a lot of excuses to not take selfies or pictures in general. Something in the air made me wants to relieve the moment. I did not care how I looked or what I wore. I just want to commemorate the moment with a flash and a pose, like a proper youth obsessing her life with infinity of pixels.

I remembered not long ago, probably about less than a year ago I was shaking and anxious inside a bookstore. I went in because it’s a habit of mine not being able to pass Waterstone’s or WHSmith without browsing some things on the first floor but that particular day I went inside with a purpose. I saw the banner for weeks and I had this curiosity that cannot be quenched until I see it with my own eyes. There was an elderly guy with his three piece uniform, sitting next to a banner near the entrance. His face was all over it and his books were stacked like a DNA helix model in front of him. He was sitting alone and waiting. A fountain pen ready just in case.

I passed him by several times but I did not have the courage to ask him for his autograph. The task was overwhelming. I couldn’t do it.

I wonder how did my fans did it.

It’s a promo but I hope the review will follow. 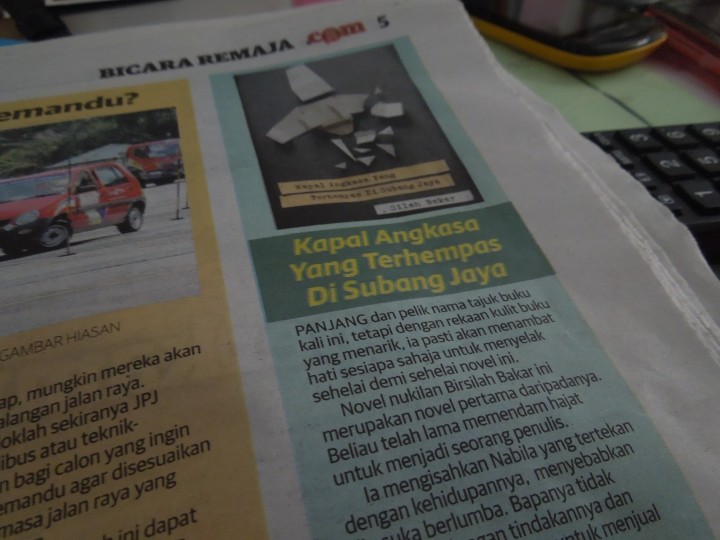 I just received a mail from my publisher 🙂

Anyone living in Kuala Lumpur can come to Central Market for Kuala Lumpur Alternative Book Festival (KLABF) on the 29th of March and I will be there for my book launching.